Creating needle felted, framed landscapes and seascapes from on and around Anglesey, Award Winning Helen Dolling is the superb artist behind Felt Inspired. 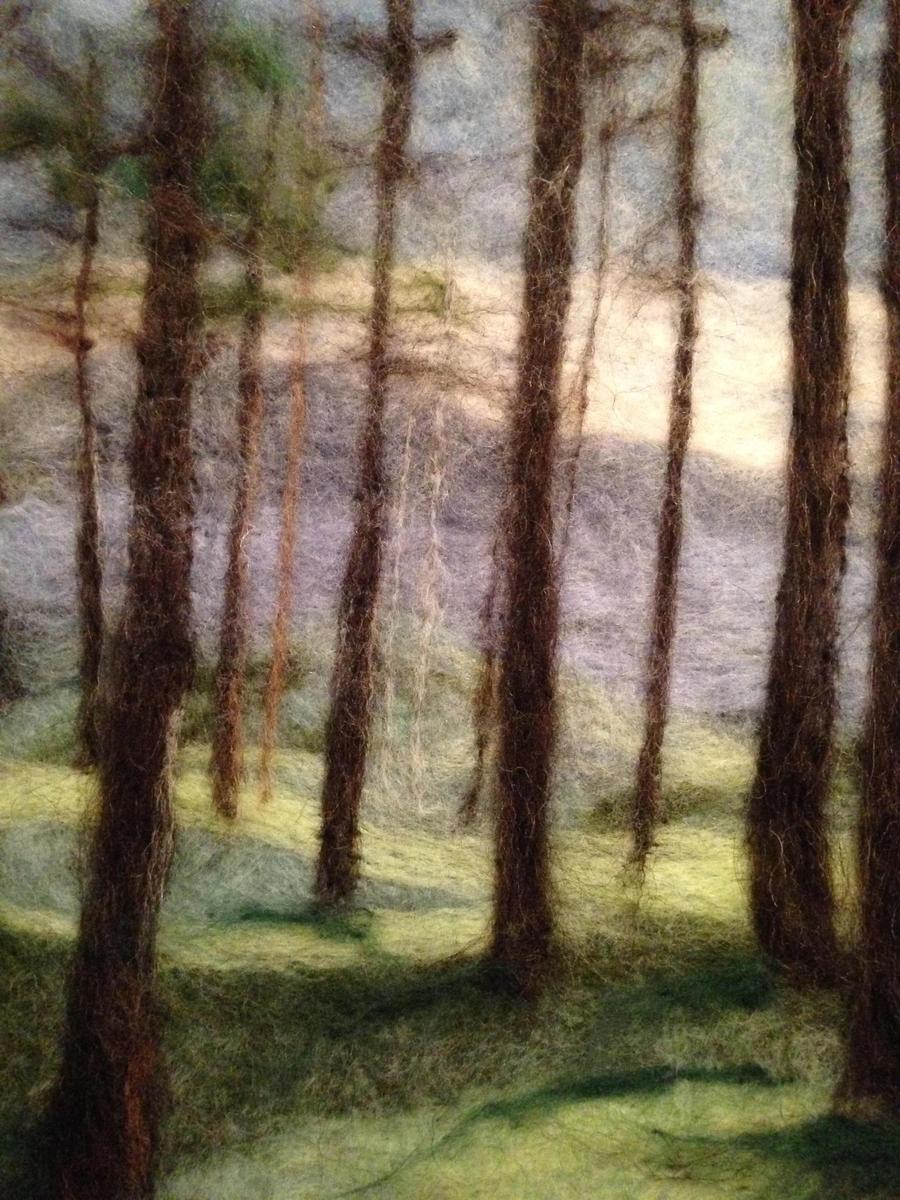 Putting down her happy teaching career, Helen and family moved to Anglesey so that she could become more available to her young children. Inspired by her new surroundings, Helen framed some of the felts and was surprised by the incredible response and interest she found in her work.

Her piece dipicting the prow of an abandoned boat which lies decomposing in a nearby estuary won her the Storiel's Open Submissions Selector's Prize in 2018.

Helen now exhibits her work with 4 exhibitions in the past 14 months, alongside running 2 open studios.

Helen's family were part of a film shot by 'Arte' for their piece on 'Isles of The Queen' which aired on French/German television in March 2019.

Helen comments ' Felting is my main area of creativity, but, like most crafters, I diversify; I also create in glass and clay, I sketch in charcoal, paint in oils, inks and watercolours, do batik, crochet and knit, and I made a treehouse for the kids. There is also in existence a papier-mache, Welsh, red dragon head, which I dried overnight in my oven, and which is now scaring small children at my daughters' primary school.'

What is your craft? (Spinning, felting etc.)

I create needle-felted, framed landscapes and seascapes taking motivation from photographs I have taken on and around Anglesey, but I also have an interest in smaller subjects such as the life found in gardens.

How long have you been a craft enthusiast?

I've been felting for over ten years, but I only threw myself into capturing land and seascapes when I gave up teaching and moved my young (and old) family to The Island back in 2016.

What do you enjoy most about your craft?

We have two active and enthusiastic young daughters, and a dependant 85 year old, so, in truth, I like that felting is the one thing that my girls will allow me to have space for.

I also like the meditative qualities of this art, the colours and textures of the wools, and the fact that I'm capturing nature using something from nature.

I'm also truly proud of what I achieve, particularly in my skies and in the reflectivity, depth or movement which I capture in water. I love the responses towards my creations from visitors to my open studios and I love how connected this work has made me feel to an area of the world to which I am a relative newcomer.

Get the latest news, promos and events from us.

Subscibe for our newsletter to get updates on the latest products, offers, and more.
© 2021 Woolsmiles.com. All Rights Reserved.
Shipping Policy
Terms of Service